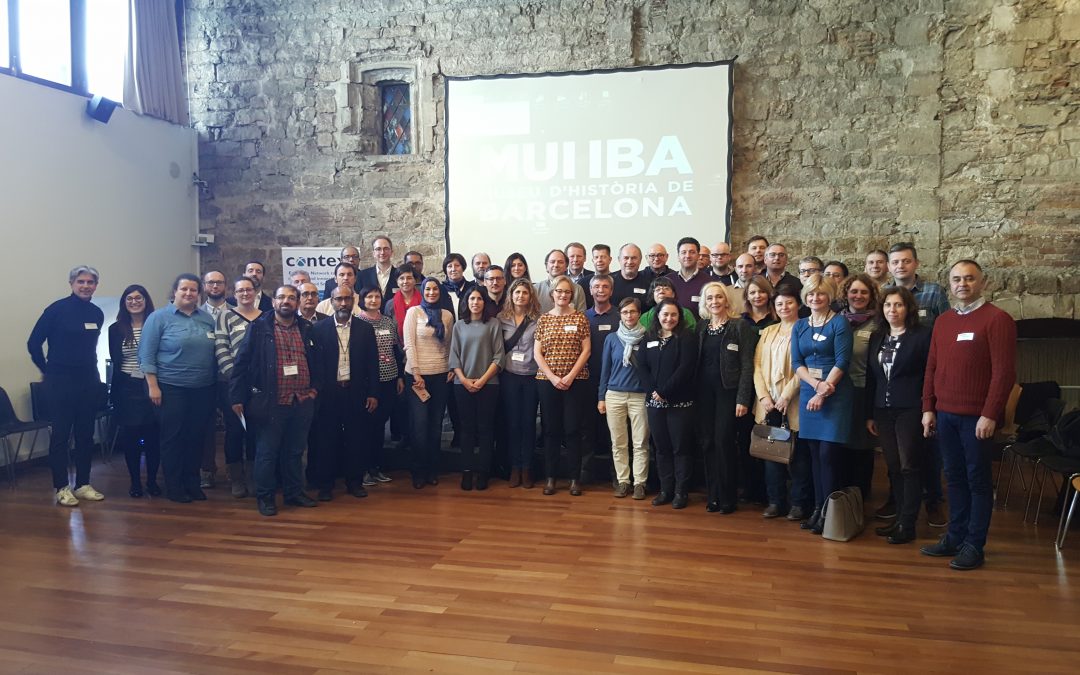 More than 70 experts from 35 countries met in Barcelona during January 30th, 31st and February 1st to participate in several activities organized by CONTEXT, the international network of experts in advanced textiles’ materials that is led by the Catalan technical textiles cluster, AEI TÈXTILS.

The first meeting of the six working groups that integrate the network took place on the afternoon of January 30th. Those are: WG1: Healthacare & Medicine, WG2: Automotive and Aeronautics, WG3: Personal Protection Equipment, WG4: Building and Living, WG5: Sports and Wearables, and WG6: Dissemination and Communication.

Each of the working groups brought together representatives from academia, research, industry and users. In order to define the major trends and research lines at each particular end-market each working group used a participatory dynamic. 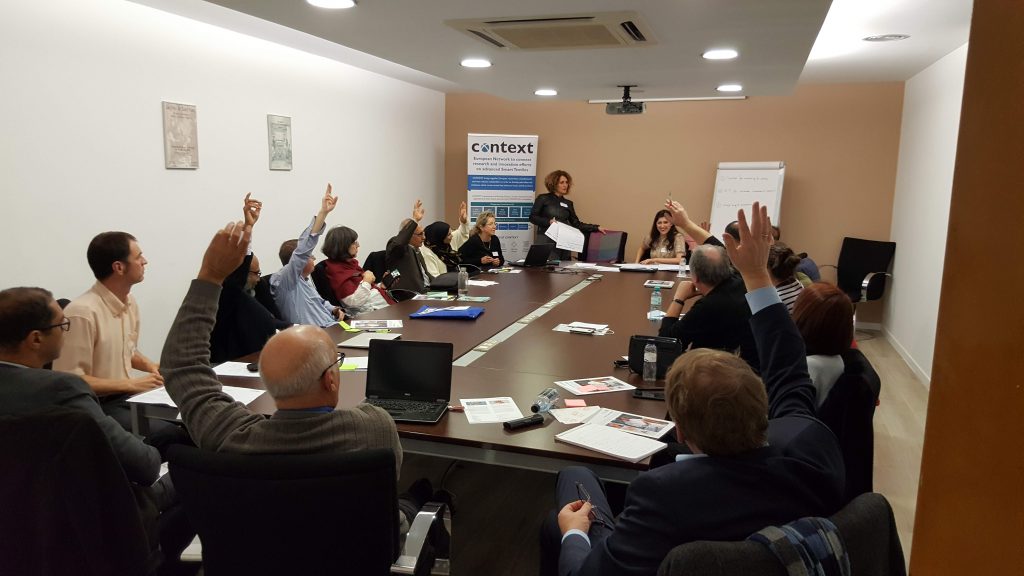 Each of the working groups prepared a report with the different work lines and activities that will be further developed during the upcoming months.

The meetings concluded with a guided tour in MUHBA – the history museum of Barcelona. 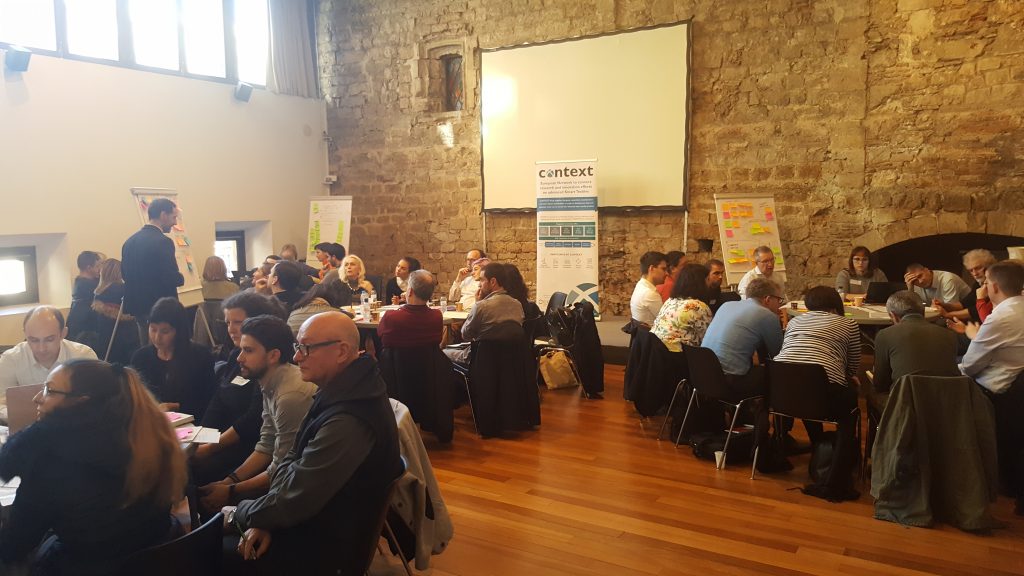 Participants during the meetings of working groups 2, 3, 4, 5 and 6 held in MUHBA

On January 31st, CONTEXT organized its first international conference as part of the public presentation of the network. The event was held in Residència d’Investigadors and gathered more than 120 participants.

Mr. Felipe Carrasco, as general secretary of the Consejo Intertextil Español, opened the conference and was followed by Ms. Matilde Villarroya, General Director of Industry from the Catalan Government. Both authorities highlighted the importance of the Spanish and Catalan textile industry respectively, the innovation potential of the sector and the relevance of initiatives like CONTEXT in order to bring together experts from different fields to foster knowledge exchange with industry in order to increase the competitiveness of the sector. The CONTEXT network chair, Dr. Ariadna Detrell (Cluster Manager of AEI TÈXTILS), and the vice-chair, Dr. Bruno Mougin (Project Manager of TECHTERA), presented the network: its origin, its founders, the current members, main activities ongoing and how to participate. 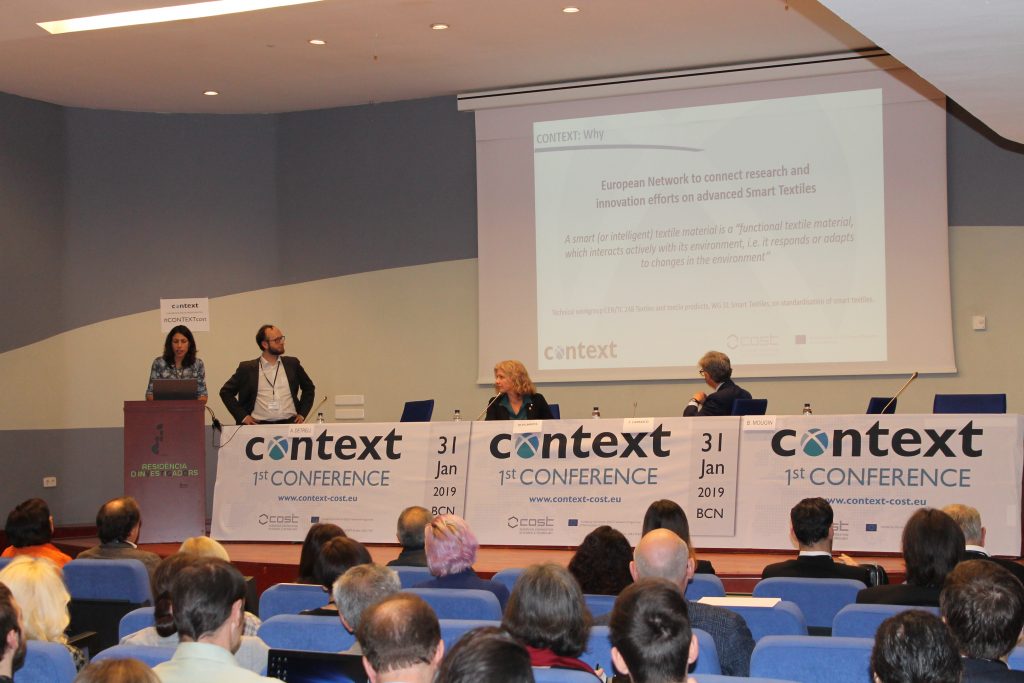 Dr. Detrell and Dr. Mougin presenting CONTEXT during the welcome of its first international conference 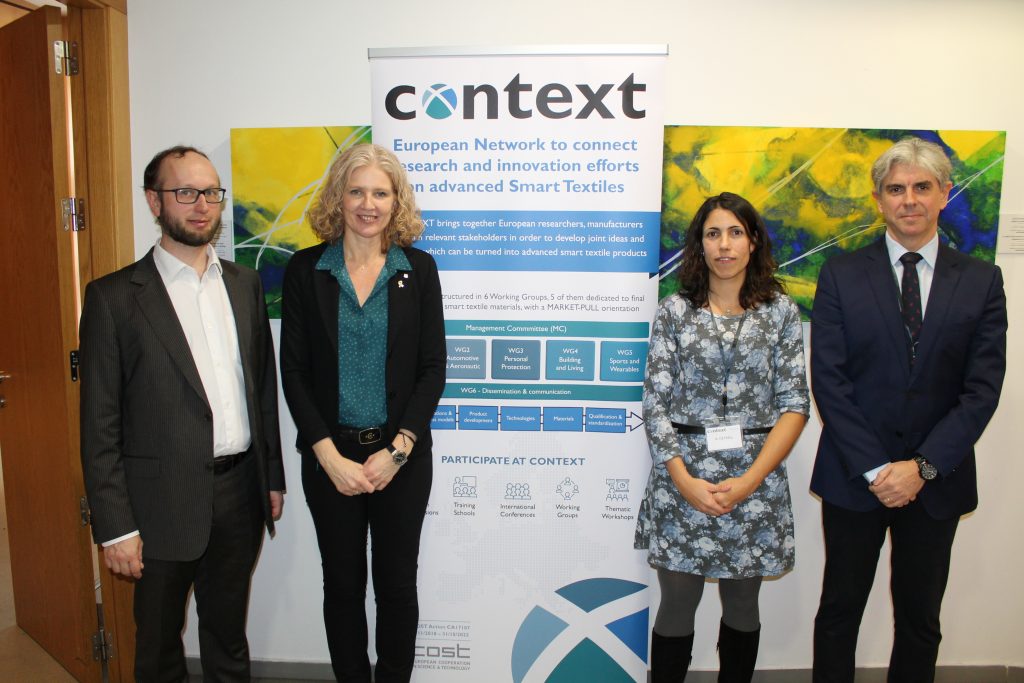 The four speakers of the opening session of the first CONTEXT conference (from left to right: Bruno Mougin, Matilde Villarroya, Ariadna Detrell and Felipe Carrasco)

After the welcome, Mr. Paulo Cadeia from CITEVE (Portugal) took the role of moderator of the Trends session where the leader of each working group from CONTEXT presented briefly the major trends in the textile materials for each sector.

Dr. Yexim Oguz (France), WG1 leader, highlighted the increase of textile material consumption for healthcare and medical applications especially due to the global population aging, the increase of the life expectancy and the increased problems derived from obesity and chronic diseases. However, the textile application in the field of medicine is complex to develop due to the stringencies of the medical industry.

Thereafter as a coleader of WG3, Dr. Daniela Zavec (Slovenia) explained the main trends in the personal protective equipment sector. She highlighted the difficulties that intelligent fabrics face in this sector due to the need to combine at technological level the different user requirements, the comfort needs and the different certifications required for each application among others. Notwithstanding, those are materials with a high potential that include the risk detection and prevention by sending emergency signals and increase the awareness of risks.

The leader of WG4, Dr. Enrico Venturini (Italy), started his presentation with a quote: “Textiles instead of concrete” and indicated that is not a slogan but a fact. He highlighted new materials and technologies that are being used in the sector including nanotechnology used for membranes for acoustic and thermal isolation, efficient energy management or light control, additionally other technologies like photocatalytic and composite materials with basalt fibers among others.

Dr. Vincent Nierstrasz as WG5 leader concluded the Trends session underlining the growth potential of intelligent and functional materials for sports and wearables. He pointed out that this is a highly multidisciplinary sector where several sciences intervene like information technology, digital electronics, etc. There are some aspects still unresolved like the washing, standardization and industrialization that need to be addressed technologically to reaching out full potential.

After the break, the program continued with the roundtable:” What is the reality of digitalization and sustainability in the advanced textiles’ industry?” chaired by Dr Mònica Ardanuy from Universitat Politècnica de Catalunya. Participants in the debate were: Dr. Omar Cherkaoui from ESITH in Casablanca, Mr. David Garcia as manager of FITEX and the Catalan fashion cluster MODACC, Dr. Volker Lutz from the German technological center ITA and Mr. Dieter Stellmach from the German center DITF.

All speakers pointed out that while there are tools available for implementing industry 4.0 and digitalization strategies, it is important that managers have an open-minded view of their use. In addition, the speakers agreed on the need of professional curriculums updating to tackle the new challenges the industry is facing. For that, there is a manifested need to align academia and industry interests. Some speakers pointed out that in order to move forward, a significant first step is to foster regional cooperation between industry and technology centers from the territory.

In relations to sustainability, the participants of the roundtable agreed that this is a major priority even though many companies still lack this approach. It is important to change the mindsets of users in order to gain traction by involving designers, producers and by implementing new regulations. 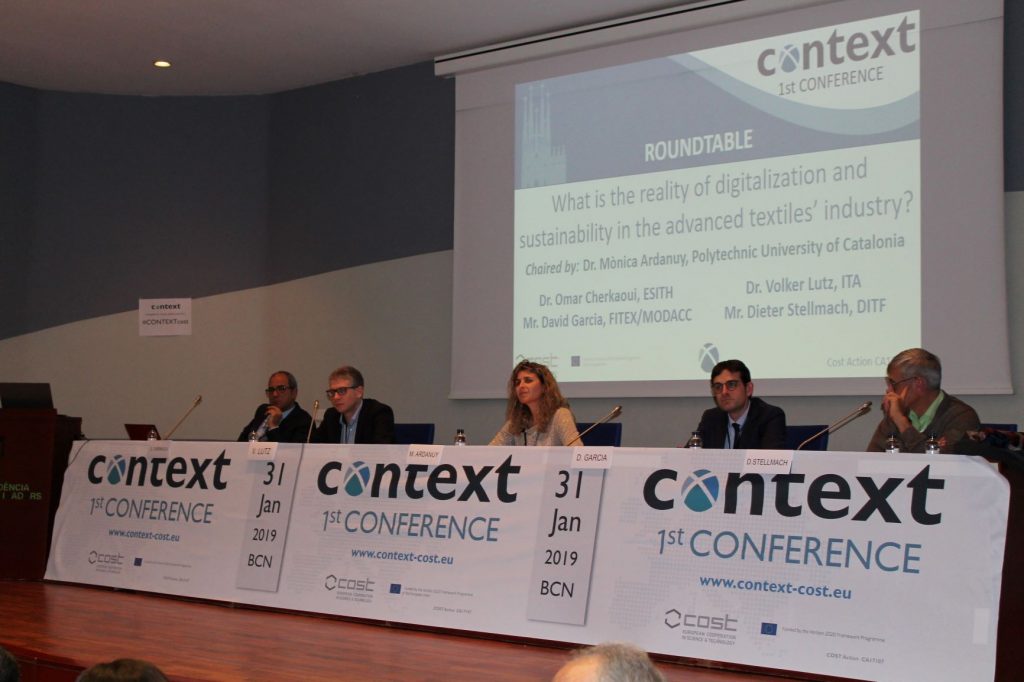 Speakers of the roundtable

Afternoon sessions started with the presentation of 9 success stories from companies from Spain, France, Italy, Portugal and Slovenia that participated in R&D projects together with research centers and led to market launch of new products. Dr. Georgios Priniotakis (Greece) chaired this session.

SensingTex and ARPE were the two Catalan companies that presented their success stories represented by their General Managers: Mr. Miguel Ridao and Mr. Joan Pera respectively

After the success stories, Mr. Felipe Carrasco as representative of the Regiotex initiative made a speech on the relevance of clusters and the need for cooperation among companies and between regions as a key factors for the success of the textile sector future.

Lastly, the conference closure was done by Dr. Penelope Shihab, a Jordan entrepreneur. She explained her track record in founding three biotechnology companies with international vocation as woman in the Arab world. In addition, she also founded a nonprofit organization to support young entrepreneurs in the field of healthcare. The keywords of her success are: perseverance, self-demanding, effort and risk.

Dr. Penelope Shihab and Mr. Felipe Carrasco during their talks

Lastly, on the morning of February 1st, the Management Committee of CONTEXT met in MUHBA to debate about the major work lines of the network, including the presentation of the results from the workgroup sessions held on January 30th and the definition of activities for the next period. Among other, the network also discussed about the affiliation of international members into the network.

Other major activities that are being conducted by the CONTEXT network, besides the conference and the workgroup meetings in Barcelona, are the publication of two calls for proposals in December. One of the calls was to offer 3 STSMs (Short-term scientific missions) and the other for 2 participations in international conferences. The Management Committee reviewed the three applications for the first and two for the second. In total, 5 grants were assigned to 5 researchers from 4 different countries.

The next event of CONTEXT will take place in Porto, from April 2nd to 4th, parallel to the iTechStyle Summit event organized by CITEVE. Several of the members from the network will present papers in the conferences and there will be a workgroup session for WG5 bringing together researchers, academics, industry and users from the field of sports and wearables. 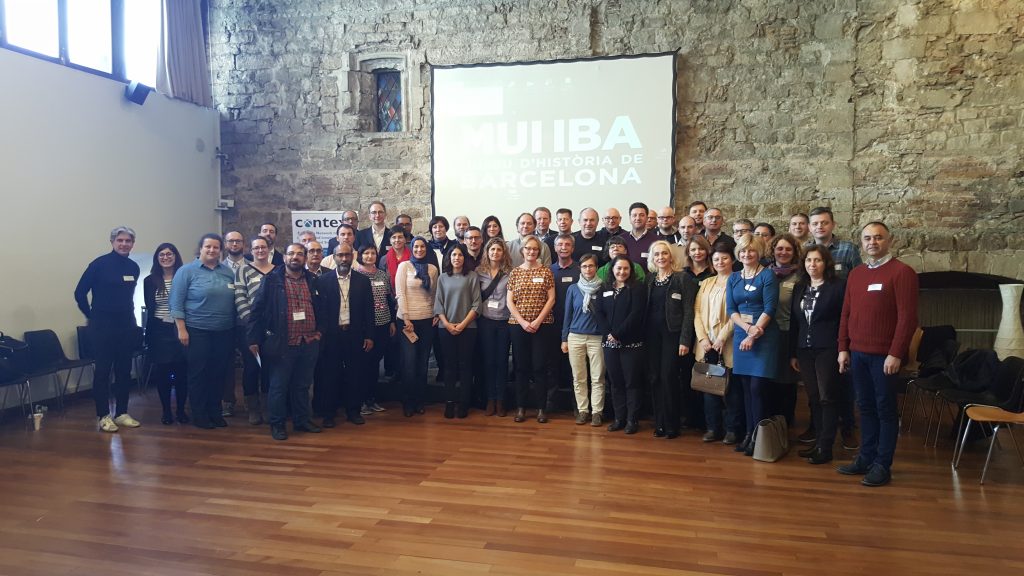